Suzuki Australia recently held a VIP preview event in Western Australia at the Perth Crown Casino to showcase their latest and greatest 2017 models before they go on sale later this year in 2017. How could we pass up an opportunity to sneak preview some new wheels!

Suzuki Australia recently held a VIP preview event across the country to showcase their latest and greatest 2017 models before they go on sale later this year.

There were a spread of models on show, with everything from learner legal machines and offroad tourers, through to high end supersports kings like the all new GSX-R1000 and it’s even more hardcore GSX-R1000R sibling. Here is a brief lowdown on the highlights of each model.

All new for 2017, the GSX250R is Suzuki’s long awaited first modern offering in the learner legal (LAMS) market, aimed squarely at class leaders such as the Kawasaki Ninja 300, Yamaha R3, Honda CBR300 and KTM RC390.

The baby Zook passes the aesthetics test with clean lines and compact packaging we have become accustomed to in this class, while still retaining some sex appeal, particularly when adorned in Suzuki’s “Metallic Triton Blue” hue. Seating position is on the sporty side of neutral, however does not appear to place any undue strain on the wrists and maintains an upright and comfortable riding stance. 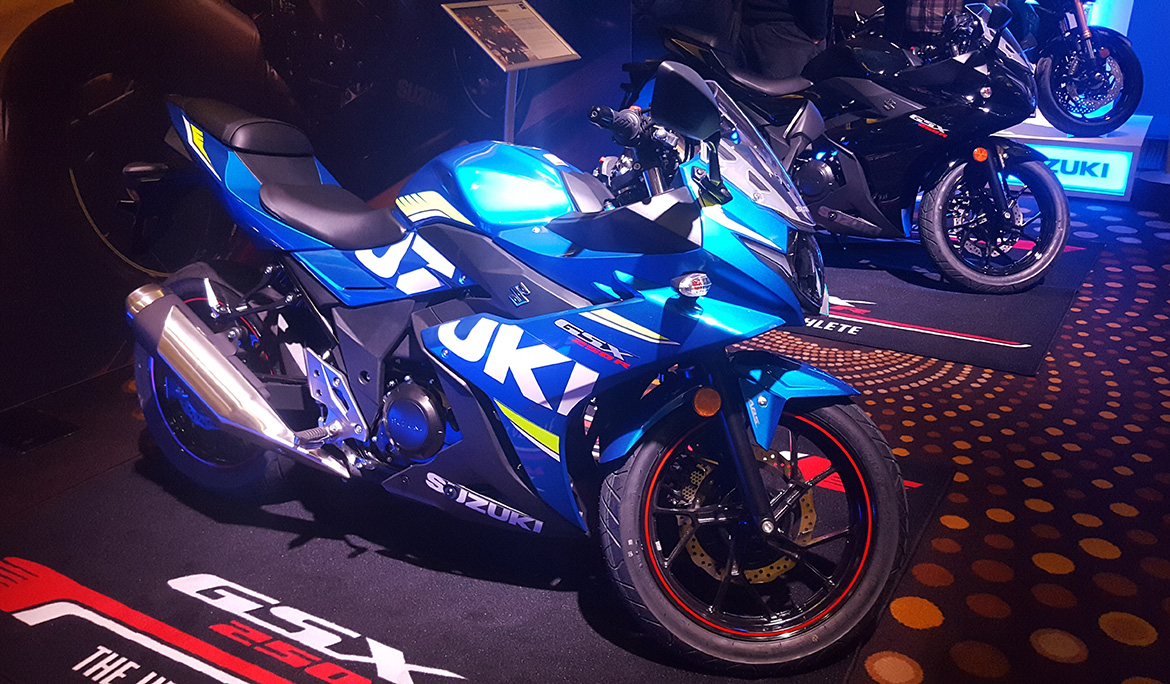 Instrumentation is comprehensive for a learner category machine, handled by a reverse lit LCD panel and displaying road and engine speed, gear position, fuel level and consumption in addition to the obligatory odometer. There are also dual trip gauges and a oil change service indicator. 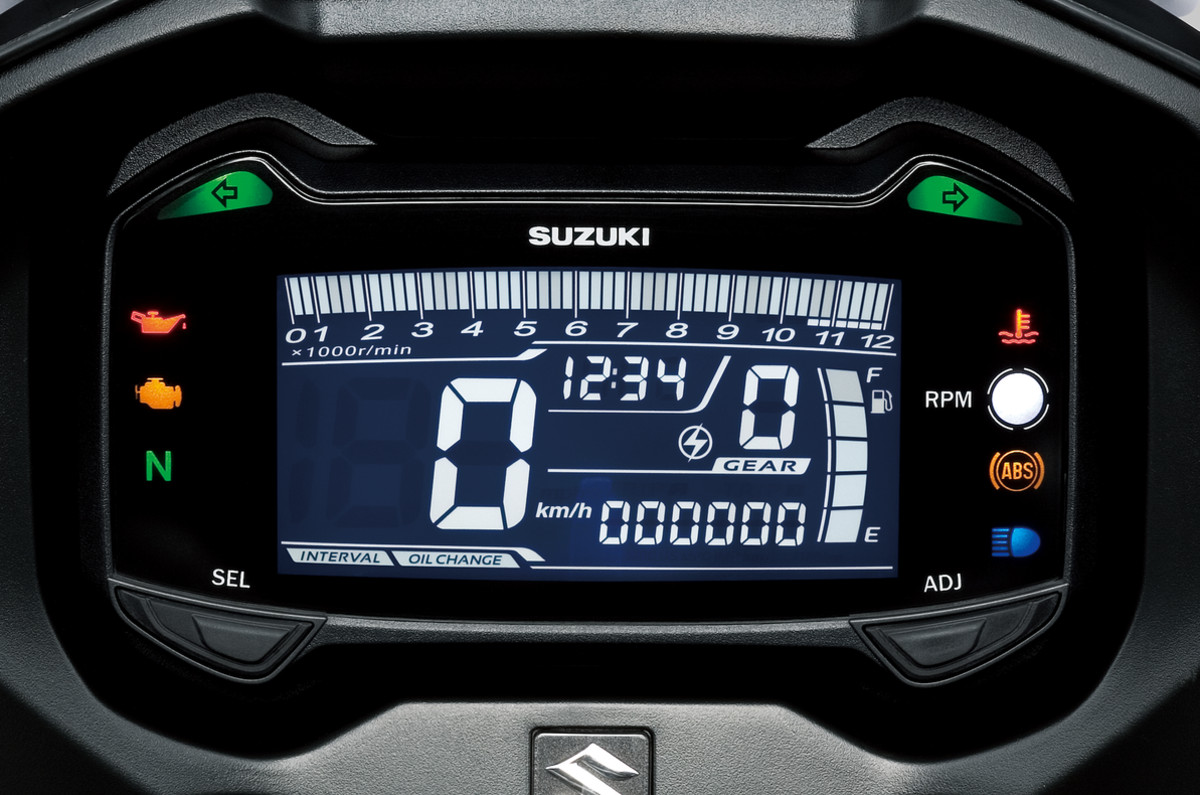 Unfortunately it all starts to fall apart from here, as when stacked against the competition the value equation does not really add up. The quarter litre GSXR is down on capacity compared to the competition, with Suzuki’s unwillingness to quote power and torque figures for the new motor not inspiring much confidence that it will offer anything special. Expect around 20kW and 20Nm from the 248cc parallel twin. Suspension is via conventional front forks and rear shock, both non-adjustable and supplied by KYB. Likewise braking is standard for this class with single disc brakes front and rear and ABS as standard on Australian models.

The little Suzuki does at least promise to be a frugal and user friendly commuter, with a claimed class leading fuel efficiency of 3.1 L/100km giving a range of 480km from the 15L tank. In my experience these figures will be a tad optimistic, however you can confidently expect to easily exceed 400km from a full tank in real world riding, which is unarguably a good figure

At $6,790 ride away the Suzuki is more expensive than the ABS model Honda ($5399 + on roads), Kawasaki ($5799 + ORC) and likely to be only marginally cheaper than the Yamaha($6299 + ORC) and KTM($6495 + ORC). None of these bikes are manufactured in their brands home country, with the Honda and Kawasaki coming out of Thailand, Yamaha manufactured in Indonesia and the KTM in India. Suzuki has not openly quoted the location of manufacture for Australia bound GSXR250’s, however a little digging suggests this motorcycle will be manufactured in China by Changzhou Haojue Suzuki Motorcycle company.

Given the above the baby GSXR appears to have it’s work cut out in what is likely the most highly contested and competitive end of the market. The final verdict will come down to how the new bike rides and handles against its competitors, lets hope it is more than the sum of its parts.

The middleweight naked class ticks a lot of boxes for many riders. The combination of comfortable riding position and effortless power can be put to work on the morning commute, or called upon when a twisty back road presents itself.

Suzuki has thrown the GSX-S750 into the fray here, and it is not an unfair proposal. Utilising the previous generation GSXR-750 supersport powerplant, albeit heavily detuned to 84kW@ 10,500rpm and 81Nm@ 9000rpm, this street brawler was never going to be short of power. For 2017 this engine has an ‘easy start’ system, basically a one push start that negates the requirement to hold the starter button down until running, and a ‘low rpm assist’ that raises idle upon release of the clutch to prevent accidental stalling and improve user friendliness in urban environments and stop/start traffic. Both features should make this bike an even better proposition for commuting and daily use. For increased performance Suzuki have revised the injectors to long nose ten hole units for increased fuel atomisation and more efficient burn, along with improved crankcase ventilation to reduce pumping losses and increase crank horsepower. With these improvements the GSX-S750 delivers strong power and torque while meeting EURO IV emissions standards and conuming just 4.9L/100km, giving over 300km theoretical range from the 16L fuel tank. 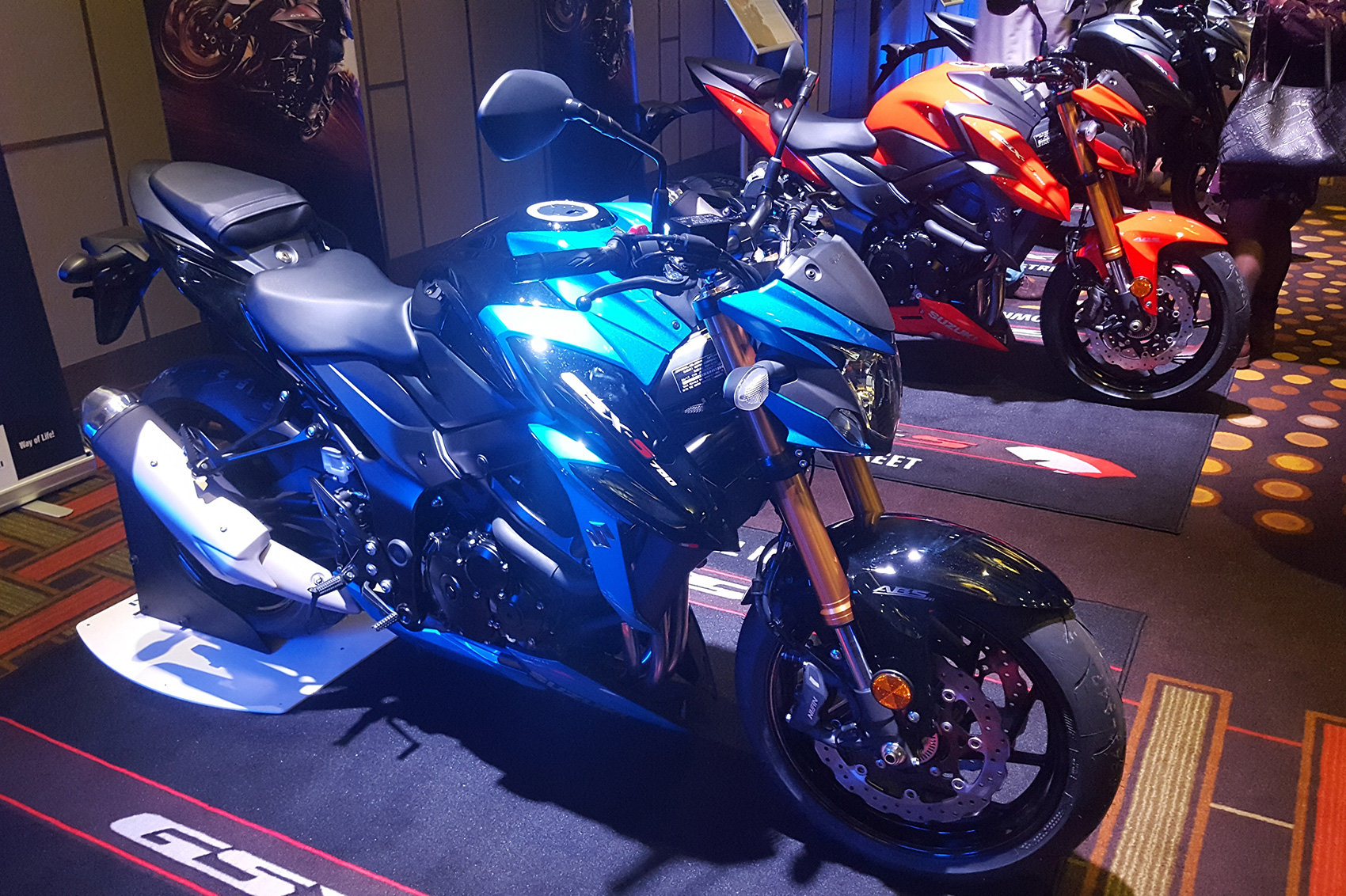 At $12,990 ride away this motorcycle is undeniably good value for money. It offers similar performance to Yamaha’s MT-09 and Kawasaki’s Z900 at the same price point with a more mature package, while besting the European competitors on price, if not finesse and quality of finish. KTM’s 690 Duke R holds a special place in my heart (I own one) but is a big ask over this, exceeding $15k rideaway. Likewise the offerings from Italy and Germany.

It can be lonely at the top, but with Suzuki’s most powerful GSX-R ever you won’t mind. For 2017 the GSXR-1000 range has had a long overdue overhaul, in a push to equip this high end road racer to go toe to toe with Yamaha’s revitalised R1 & R1M, Honda’s all new CBR1000/SP, Kawasaki’s legendary ZX10R, Ducati’s beautiful 1299 Panigale and BMW’s high tech S1000RR.

For a showdown against the competition we will have to wait, but for now does the Suzuki have the credentials to compete with the finest Europe and Japan have to offer. The Suzuki comes in at the lower end of the price range with a rideaway offering of $23,990 for the base 1000. The R model commands an additional $3,500 at $27,490, but more on that later. 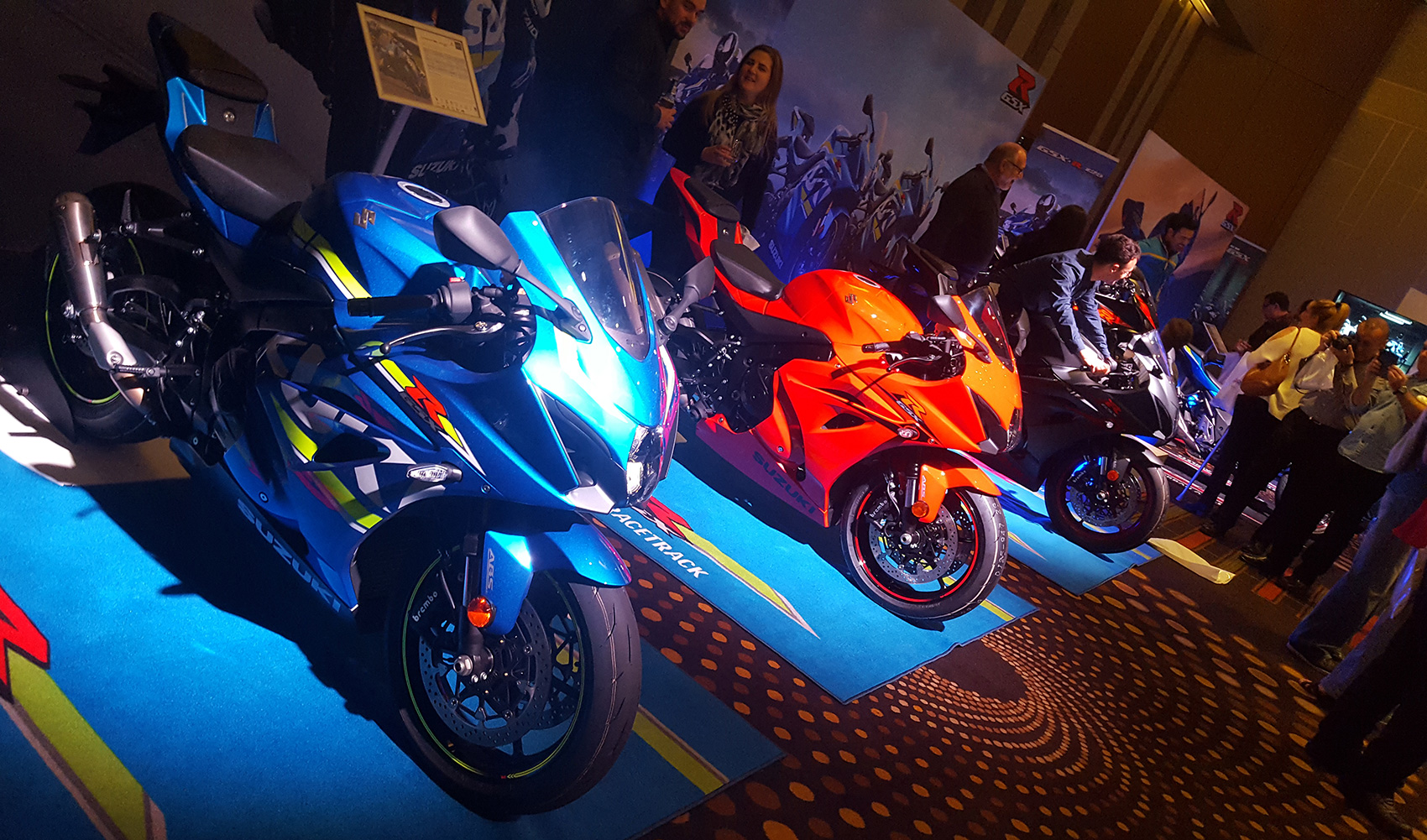 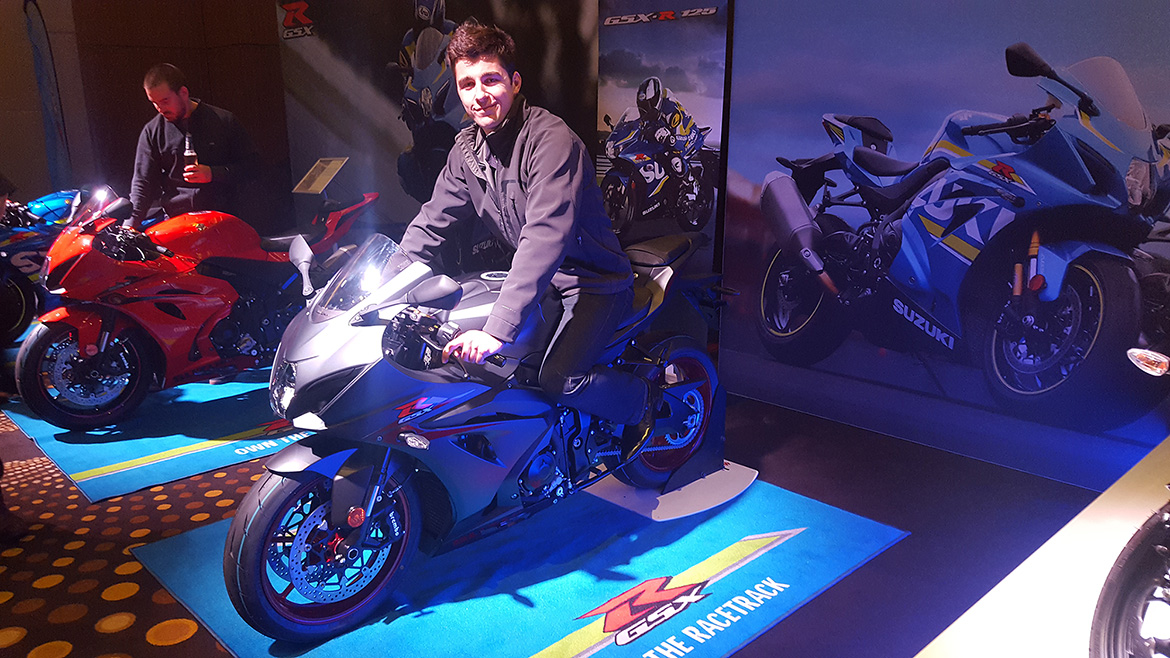 Also new for 2017 are Suzuki’s 10 stage ‘Motion Track’ Traction Control System and Drive Mode Selector. This system operates in a similar fashion to the competition, allowing the rider to vary power output and electronic intervention depending upon the conditions being experienced. There is also an Inertial Measurement Unit which measures the bikes acceleration in six different axis, feeding this information back to the electronic control systems to maximise the performance and stability of the bike in all conditions. We’ll have to wait for a first ride to ascertain the user friendliness and operational effectiveness of these systems, but if Suzuki have done their homework they should make the new GSXR more competent and formidable in the hands of riders of all skill levels.

The R is really positioned for the serious racers, to whom the standard model would not be sharp enough for the intended purpose. In this sense Suzuki has applied a standard recipe to cook up some sales, removing weight from the bike and adding top shelf suspension and the obligatory for 2017 electronics package. 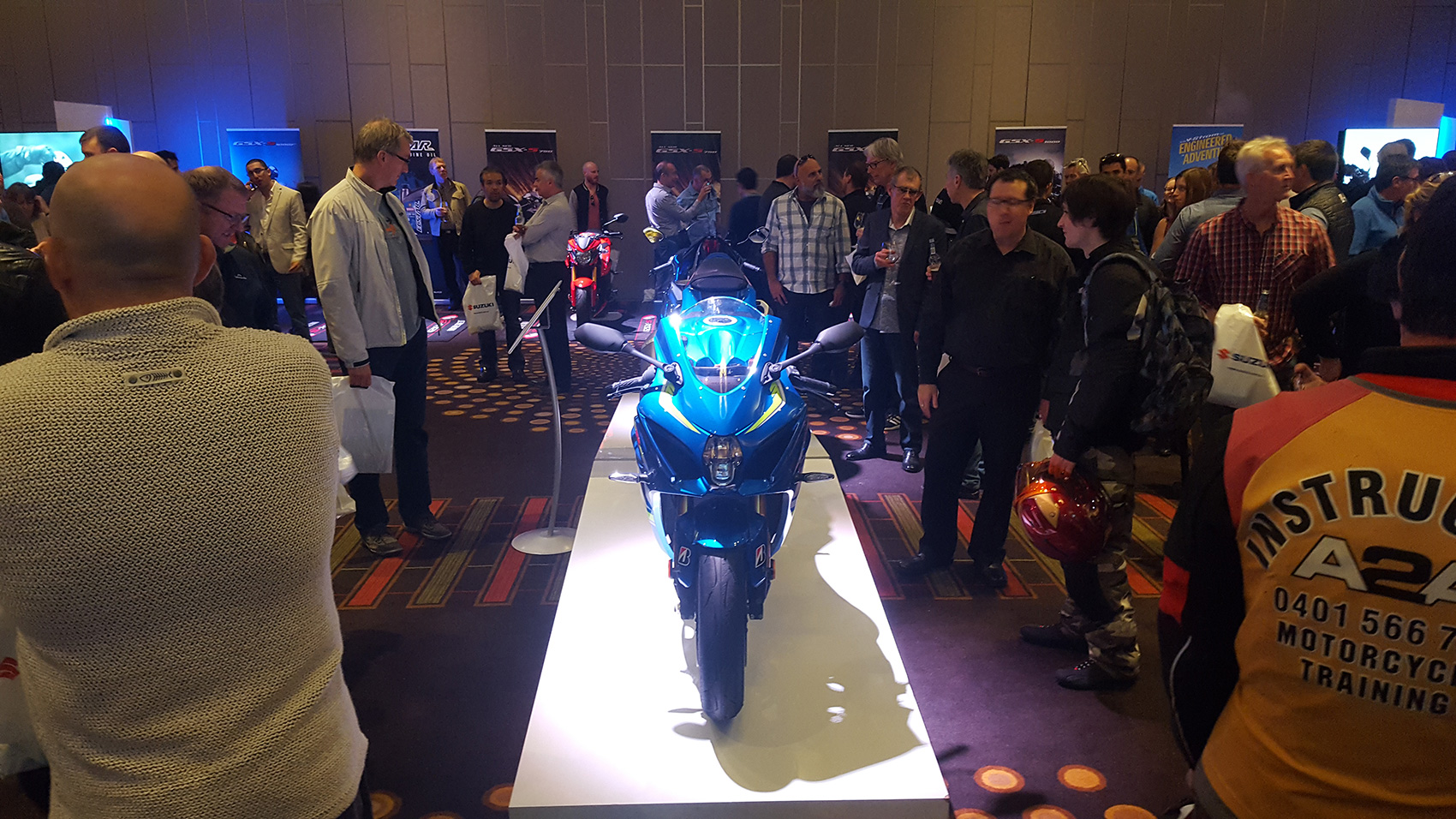 The suspension is high quality and offers adjustable preload, rebound and compression damping both front and rear. Unlike the active suspension of the Yamaha R1M and Honda CBR1000RR SP, the Suzuki arrangement is passive and not able to make any adjustments when on the move. While this could be a disadvantage, the simplicity and weight saving achieved with more conventional manual only adjustment will likely be favoured by those using the bike for mostly track duty. Most race surfaces have a consistent and predictable surface and once honed to that particular track and the riders preference the bike should not require further adjustment. The corollary of this is that the competitions electronic adjustment on the move will allow them to adapt seamlessly to changing road conditions and endow the bike a more adaptable personality on ever changing public road.

Much like it’s smaller GSX-S750, the GSX-S1000F is based on the architecture of the GSX-R1000 superbike with a more relaxed approach to proceedings. The “F” in this case denotes a modest fairing that gives a clean aesthetic touch and offers the rider some protection from the elements. 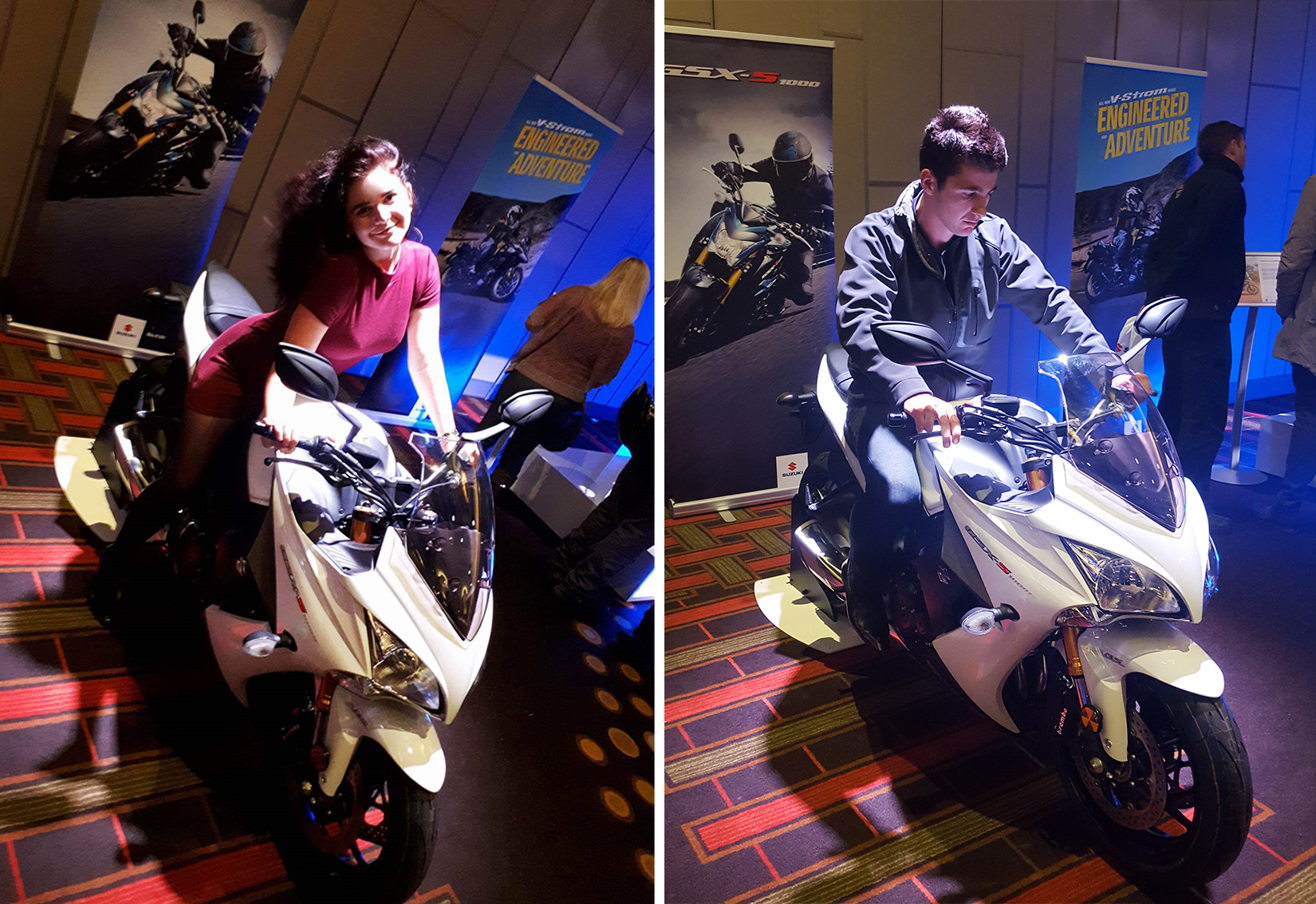 One of my favourites from the night, the GSX-S1000F in white. A comfortable, spacious and sporty tourer.

The GSX-S has also inherited the twin radial mount Brembo Monoblock brake package from it’s sporty sibling, which if unchanged from similar applications will endow the bike with superb stopping power and progressive feel. Channeled through an ABS arrangement as standard assists in keeping the bike rubber side down in all conditions, though it will be no substitute for keen rider skill and attention.

At $15,490 rideaway, this one litre naked is hard to ignore. Much like it’s GSX-S750 sibling this model offers great value and unbeatable performance. Cross shop with Yamaha’s MT-10 and Kawasaki’s Z1000 for similar performance on a sub $20k budget.

Now here is something that can live up to the ‘Dirty Drifter’ mantra! Suzuki has taken their venerable V-Strom 1000, an always dependable but decidedly road focused touring bike, and given it the Dakar treatment. In addition to the host of standard V Strom features, the new XT model comes complete with wire spoked wheels, adjustable inverted 43mm forks, tapered handlebars, hand guards and adjustable windscreen. 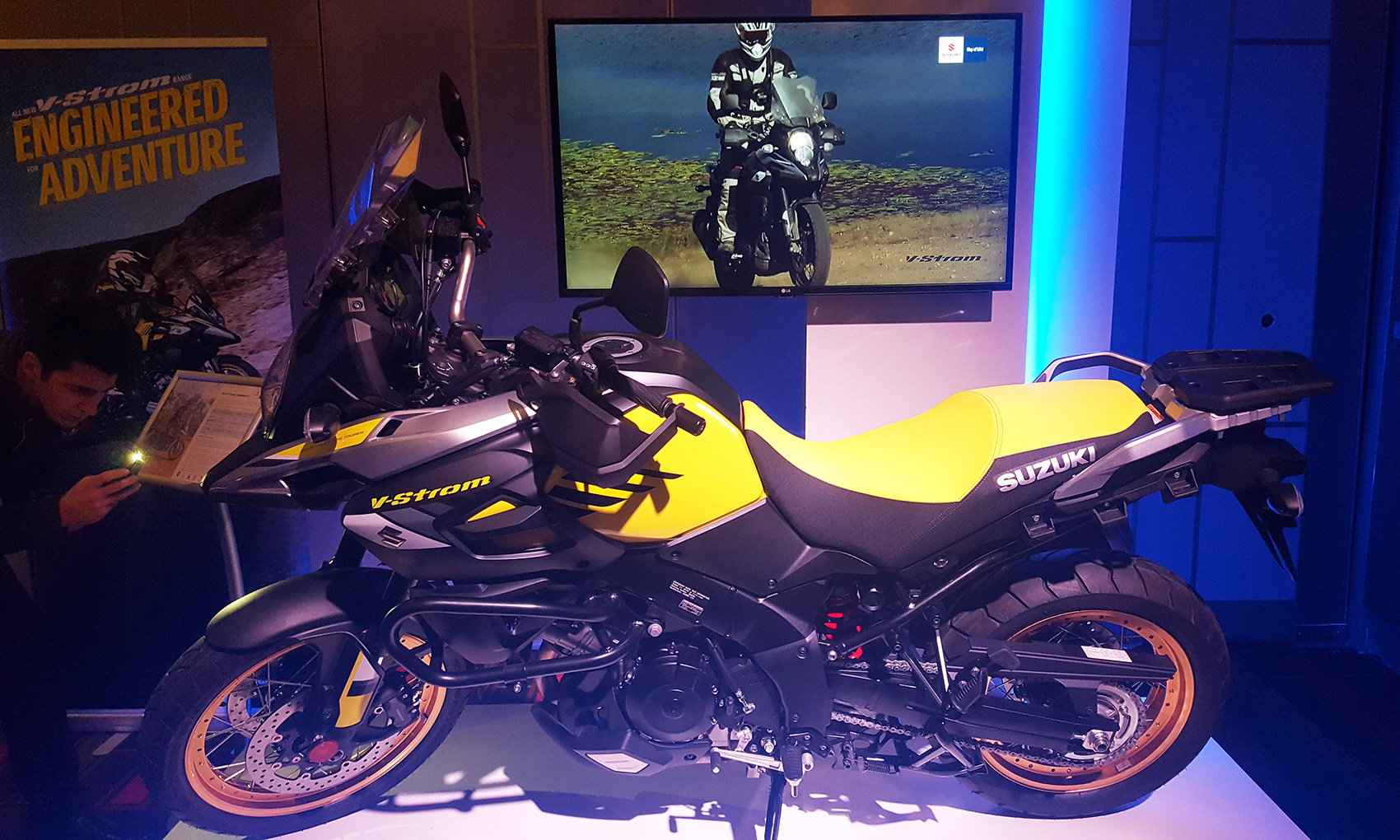 The spoked wheels are a tube less design 17 inch rear and 19 inch front, enabling use of a wide range of tyres with easy changes and no messing around with tubes. The 17/19 combination is a good compromise between on road stability and off road durability, making for a comfortable go anywhere tourer. The wheel design is interesting, a wire spoked design looping the spokes through a raised ridge on the wheel hub which maintains a uniform and sealed mounting surface for the tyre and negates the need for an inner tube.

The 1037cc 90 degree V twin engine provides a reasonable power output of 74kW at a tractable 8000rpm, however more importantly 101Nm is on tap from 4000rpm for a punchy mid range most useful in this class of motorcycle.

A 20 litre fuel tank is fitted as standard and offers a usable range of 400km, though significant off road use will bring this down.

Out  of all the bikes I saw tonight, the one I would purchase is this yellow V-Strom. It’s efficiently equipped and I like it’s go anywhere attitude.

Adam is a qualified Mechanical Engineer and auto enthusiast who loves escaping into the wilderness. He's a 'Mr-Fix-It' kind of guy that can give you a detailed rundown on just about anything with an engine! His side passions include motorcycling, snowboarding and making sure Tahnee doesn't get into too much trouble (it's a full time job).

Pretty Pink Lake on way to Kalbarri in Western Australia

The Best Kept Secret in the South West...

🔸Undara Experience, Part 2🔸 Have you ever 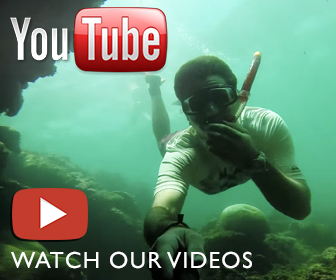 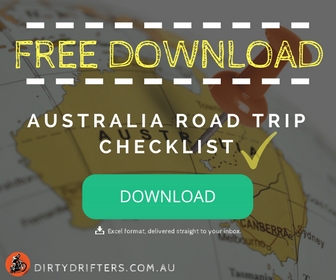 🔸Undara Experience, Part 2🔸 Have you ever